The Fairness Of Relationships

Hak Chan keeps avoiding meeting Yoo Jung’s friends. Finally he shows up and pays for the bill, which makes Yoo Jung’s heart melt. But when Hak Chan does not introduce her to his mother as his girlfriend, Yoo Jung breaks up with him. Shi Won’s parents go on a cruise vacation leaving Shi Won alone. On her way back home from working at the convenience store, a man follows her. Afraid, she repeatedly calls Yoon Jae, and Yoon Jae repeatedly calls her. But they do not get connected until she calls his home phone. Yoon Jae dashes to where she is, bleeding with only one slipper. Shi Won realizes that their relationship is not simple friendship, but it is a complicated relationship between a man and a woman. 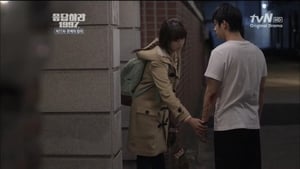