Yoo Jung’s father passes away. She realizes that there are no next times. She should have been good to him when he was around. Her friends come to the funeral. Even Hak Chan finally shows up. Shi Won runs into Yoon Jae in a coffee shop. He had avoided seeing her for 6 years. She asks if he has a girlfriend and catches him lying. Shi Won tells him that she likes him. Yoon Jae hesitates to answer, even though he knows that there is never a next time.Meanwhile, Tae Woong has been Daddy Long Legs to Shi Won throughout all this time. He asks her if Shi Won knows how the ending of the story goes, telling her that he wants more. Shi Won does not want more from him. Even 6 years ago, Shi Won told him that she likes somebody else. Yoon Jae overhears Shi Won and Joon Hee talk about both of their crushes on him. He is beyond shocked. 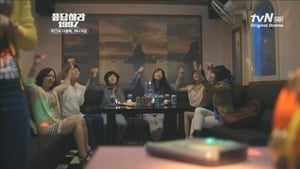