What You See Is Not Everything

Shi Won goes to Seoul and camps in front of Tony An’s house. She finally returns home after getting her T-shirt signed. When she returns home, her father cuts her hair as punishment. Since then, her parents fight regularly. She confides in Joon Hee about her worry about their quarrels. Yoo Jung also cuts her hair to show moral support for her friend. This act restores their friendship. A new student from Seoul transfers to Gwangan High School. He may be Yoon Jae’s rival as the best looking guy in school. He is good-looking and cool. He is macho, and he impresses the other boys. But in front of girls, he is extremely shy. Somebody under the name 1004 (angel) sends Yoon Jae a music file. He thinks it is from Shi Won, but she is not interested in him at all. In fact, she talks badly about him to Joon Hee.Shi Won and Joon Hee chat online and exchange big secrets. Shi Won realizes that what she knows to be true is actually not true at all. 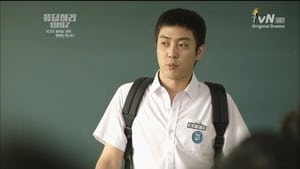