Shi Won’s father has gastric cancer and is in the hospital. Everybody in his ward watches a popular drama until the main character finds out he is dying from cancer. This depresses all the cancer patients. Shi Won’s mother starts calling the drama writer to make her change the story line.Shi Won writes Tony An a fan letter in her own blood in order to become a board member of H.O.T.’s fan club. But when she hears that Tony An is disgusted by it, she is crushed. Yoo Jung devises a way to go see a basketball game with Yoon Jae alone. But Yoon Jae asks for the tickets so that he can cheer up Shi Won. Yoo Jung is crushed, so Hak Chan tries to cheer her up. She ends up kissing him. At the basketball game Yoon Jae tells Shi Won that it bothers him to see her so close with Joon Hee, but she does not hear him. The grown up Yoo Jung and and Hak Chan announce their wedding plans at the reunion. Shi Won is pregnant, so she cannot drink. 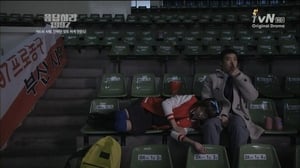